Until We Meet Again - Scottie Pace

When Scott and I met

One Friday evening I was riding to a young single adult swim/skate event in Northern Virginia. While my car mates argued about the best way to get to the event, I noticed a car that had license plate rim that said “Sierra Vista” written on it. I was floored.  I thought “I am from Sierra Vista….I know everyone from there! Who is this? Oh my gosh, we are following this car on these random back streets…this doesn’t just happen!” I shouted to my driver “Follow that car!!!” The driver was taken aback as I continued to think out loud saying, “Wait a minute, they are headed to the event. I thought I knew all the singles from Sierra Vista.” Turns out the car was heading away from the event, but I was so curious as to who it was that I demanded the driver follow him. Instantly the car in front made a U-turn and headed back to the even (those darn GPS’). I was sure the driver was scared that we so intently followed them/him. We ended up parking right next to the car, I jumped out before our car came to a stop, and went right over to the side of the Sierra Vista stranger’s car. Realizing my act may have been brazen and a little crazy, I slowed down to give the driver enough time to exit the car without feeling threatened.

Cautiously, a young man exited his car, looking at me like I was about to tackle him. A little blunt, I blurted “Sierra Vista, Arizona – I’m from there. Who are you?” He laughed at me and told me his name was Scottie Pace and asked me mine. When I told him I was Lindsey Blau, he threw his head back smiling and said “Did you know that we were supposed to have been set up on a blind date a year ago when you had your high school reunion?” I instantly recalled the night my former Bishop, Gary Haymore, and his wife Del Anne tried to connect me with one of their Young Single Adults (YSA)s. I was bewildered at the recall. We got to know one another fairly well that evening, and reconnected shortly after during a beach trip to Virginia.

I am not one that believes in coincidences. I have no doubt in my mind that my relationship with Scott was divinely orchestrated. While our time was brief, I was touched by one particular experience that has shaped my character in ways I never thought possible.

I received an email from Scottie about visiting some of his soldiers at the Walter Reed hospital in Bethesda. The email detailed an account of two soldiers who were apparently down due to friendly fire. He recounted the story about how ground control called in air support to help them take out the enemies shooting at them. When the pilots were in the air, they lost communication with ground control. One of the pilots thought she was the one that released her bombs early and hit her soldiers during the raid.

Around this time, I was reacquainted with a buddy from high school who was an army medic at Walter Reed. I told him I wanted to go visit the soldiers, asking if he wanted to come too. He called me immediately letting me know that the soldiers were just placed under his care since the soldiers were part of the 82nd Airborne. Again, this doesn’t just happen.

We paid the visit with one of the soldiers and his family. He was doing well and in good spirits. We wanted to spare telling him the details of the email (knowing the persons who may have contributed to him being in the hospital), but we did tell him that one of the pilots sent me there to tell him how much his service meant to his unit, and that Scottie Pace wished him a Merry Christmas.

Then, my friend asked him the details of what happened that day. He recalled the story that they called air support, air support did their thing, then left and 25 minutes after air support left, they were bombed by the enemy.

While there was no official report of what happened that day, Rudy double checked his story and again he reiterated that he was not injured due to friendly fire. After the account, Rudy told the soldier that it was reported that one of the pilots thought she contributed to his injury. He immediately said, “Give me her phone number. She needs to know this was not her fault.”

This experience taught me so much about the man Scottie Pace was/is. He cared for people so deeply and so profoundly. He allowed the Spirit to direct him to reach out to his friends, so we would have the opportunity to mourn with mourners and gave me the opportunity to strengthen those I visited, adding to my testimony of the mercy and love of Jesus Christ. That is why we are here in the first place. Scottie taught me that.

I know that this particular situation altered my perception and view of personal revelation and goodness. I KNOW that there were higher forces working on something during this experience. I just can't get over the timing of everything. What I failed to mention was this whole experience happened in 3 days…that’s it.

Day 1, Saturday: Reunited with my buddy Rudy, (Staff Sergeant Nunez)
Day 2, Sunday: Re-read Scottie’s email sent only 1 week prior.
Day 3, Monday: Sent Rudy the info asking if he wanted to join me to visit the soldiers. He called me right away saying they were JUST placed under his care. Visited with one of the soldiers (the other had been sent to NM) that night. Emailed Scottie the next day.

The Man Scottie Is 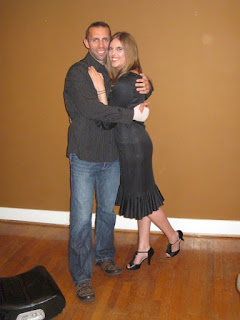 It was not hard for me to become close with Scottie, and while our communication varied in frequency, I always felt a special and fun bond with him. Just two months ago, I wrote an email to him that said:

“I was recalling a memory of mine, which - if you remember - is tremendously lacking as of late. It was in Virginia Beach. Upon arrival to the beach, you offered to carry my beach bag. I knew you hurt your wrist and felt bad about you carrying it, but because of your amazingness, you carried it. Later, I could tell you were in pain, but even though you were hurting, you didn't complain all that much, but I could tell you needed the drugs. I was going to go to the car by myself to get you some, but you insisted on accompanying me because you didn’t want me to go by myself. For some reason, this has had a lasting impression on me. That is why I was thinking about you the other day.”

I always admired how much he loved and cared for his family. It was during the beach trip that he talked of his fond love of his family. He spoke reverently of his mother, and told me how much he respected his dad. A mischievous smile crossed his lips when he talked about his brother, and he had a protective look when he talked about his sister. He was super excited to become a family man…something he would often tell me scared a lot girls he dated, to which I would jokingly tell him not to reveal that information on a first date…who wouldn’t be scared? ;) Truth is, I wasn’t…and found his propensity for family refreshing. The relationship he had with his family is certainly one to be respected.

Scottie has been an incredible example to me of courage, fortitude, and constancy. I will never forget our brief moments. I have been touched by his example, his Spirit, and those gorgeous eyes. He exemplifies the kind of person I want to become. Until we meet again, my dearest friend.

Posted by Unstoppable Lindsey at 9:44 AM 8 comments:

Unstoppable Lindsey
Give me a taste of life; I drink it in. I love discovering new cultures, amazing sights and great foods! Take me to the ocean any day; I'll take in the salt and sun with Coppertone Babies SPF 30. I enjoy running through the sprinklers and swinging on the swings. I am the kind of girl who cries during AT&T commercials and loves to laugh to the point where it hurts to breathe. My motto: Breathe in life and laugh til it hurts. Life is all about enjoying the little things...blowing bubbles is only one of them!

Some of you may have noticed I have been posting a lot about the Happiness Project. If you have no idea what I am talking about, here is a post that explains what I am doing and why. I hope you enjoy reading about my journey!

I am determined to be cheerful and happy in whatever situation I may find myself. For I have learned that the greater part of our misery or unhappiness is determined not by our circumstance but by our disposition. - Martha Washington